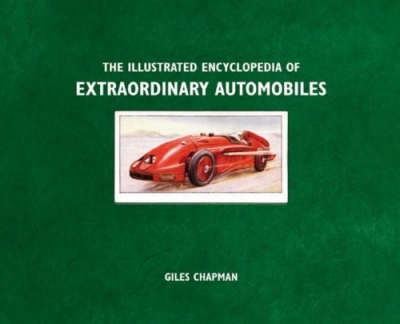 THE ILLUSTRATED ENCYCLOPEDIA OF EXTRAORDINARY AUTOMOBILES

Besplatna isporuka za porudžbine iznad 2.000 dinara
Kako da kupim?
Giles Chapman is an award-winning writer and commentator on the industry, history and culture of cars. He began his career in 1984 in automotive consultancy, moving into magazine publishing in 1985. By 1991, he was editor of Classic & Sports Car, the world's best-selling classic car magazine. Since 1994, he's worked freelance across a huge variety of media. Today, he contributes to national newspapers and motoring publications, and was voted Jeep Consumer Journalist Of The Year in 2005, BCA Feature Writer Of The Year in 2008, and AA Environment Writer Of The Year 2011.

He's the author of almost 40 books including 'My Dad Had One Of Those' (co-written with Top Gear's Richard Porter) that was a non-fiction hardback best-seller in 2007 and has since sold almost 170,000 copies. This makes it one of the best-selling - and most popular - car books of all time.

His book 'Chapman's Car Compendium' won the Montagu of Beaulieu Trophy in 2008. Dorling Kindersley's 'The Car Book', published in 2011 and on which Giles Chapman was Editor-In-Chief, won wide acclaim as well as advance orders for 81.000 copies in several language editions. He's also worked with BBC Top Gear over many years.

Giles Chapman's reputation for painstaking research and entertaining writing is reflected in praise from some of the most demanding independent critics. Here is a selection.

Chapman's Car Compendium: 'Open this book at any page and you're bound to find something fun' - Autoweek magazine. 'Even the best-informed petrolhead is guaranteed to learn something new' - 4car website.

The Car Book: 'Everyone in our office was taken aback by the depth of this impressive work' - Classic & Sports Car magazine, where it was Book Of The Month in June 2011. 'This thumping hardback blows all preconceptions out of the weeds. With a decade-by-decade breakdown of automotive history, it's packed with detail' - Octane magazine.

The Land Rover Story: 'Fine investigation into the development of the Land Rover' - Classic & Sports Car magazine. 'Chapman has produced another good 'un with this potted look at Britain's mighty Landie in all its flavours' - Octane magazine.

His most recent two titles, Cars We Loved In The 1980s and Racing Driver: How To Drive Racing Cars Step By Step, are published in 2014.