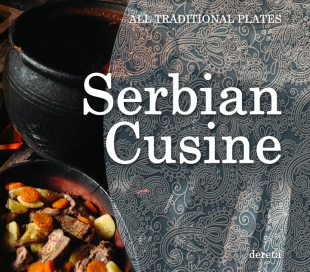 Besplatna isporuka za porudžbine iznad 2.000 dinara
Kako da kupim?
Since ancient times, mores and amenities have played an important role in preserving the identity of a people. Most of the Serbian population in the Middle Ages were sebri – farmers with a rich tradition, and all the richness of Serbian cuisine is derived from its geographic, ethnic and cultural diversity, which result from centuries of population mixing. Through the preserved Serbian cuisine recipes, the reader will get to know some ethnic motifs, and only a small part of huge Serbian natural resources. Today we witness many examples of the adjustment of tradition to a completely different, modern way of life. However, the old values and respect for nature have never been entirely suppressed in Serbia.