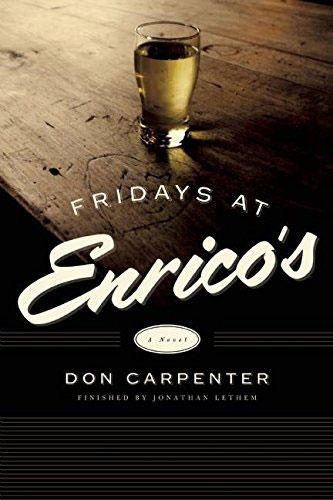 Don Carpenter was one of the finest novelists working in the west. His first novel, A Hard Rain Falling, first published in 1966, has been championed by Richard Price, and George Pelacanos who called it “a masterpiece…the definitive juvenile-delinquency novel and a damning indictment of our criminal justice system,” is considered a classic. His novel A Couple of Comedians is thought by some the best novel about Hollywood ever written.

He was a close friend of Evan Connell and other San Francisco writers, but his closest friendship was with Richard Brautigan, and when Brautigan killed himself, Carpenter tried for some time to write a biography of his remarkable, deeply troubled friend.

He finally abandoned that in favor of writing a novel. Friday’s at Enricos, the story of four writers living in Northern California and Portland during the early, heady days of the Beat scene. A time of youth and opportunity, this story mixes the excitement of beginning with the melancholy of ambition, often thwarted and never satisfied. Loss of innocence is only the first price you pay. These are people, men and women, tender with expectation, at risk and in love, and Carpenter also carefully draws a portrait of these two remarkable places, San Francisco and Portland, in the 50s and early 60s, when the writers and bohemians were busy creating the groundwork for what came to be the counterculture.

A great champion of Don Carpenter, Jonathan Lethem, has taken on the task of editing and developing this last draft into the shape we imagine Carpenter would have himself accomplished had he lived to see this through. And Lethem provides a wonderful introduction to this book, to Carpenter, and to the broad influence of his work which resonates until this very day.

The Hollywood Trilogy: A Couple Of Comedians, The True Story Of Jody Mckeegan, And Turnaround