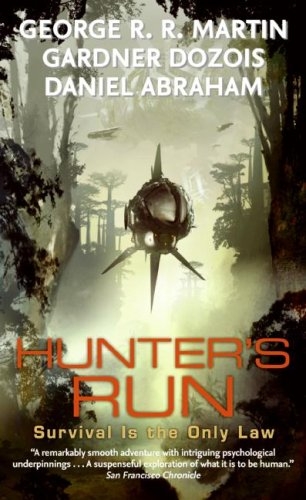 Besplatna isporuka za porudžbine iznad 2.000 dinara
Kako da kupim?
Starred Review. Martin (Song of Ice and Fire series), Dozois (Strange Days) and Abraham (A Shadow in Summer) revisit classic themes of exploration, exploitation and what it means to be human in this gritty SF adventure. Humanity has finally reached the stars, only to find that all the best spots have been claimed by other races—the Silver Enye, Turu, Cian and others. Human colonists serve as world-building crash-test dummies, dropped onto empty planets deemed too dangerous or inconvenient for other races, to pave over whatever marvels and threats evolution had put there. On the misbegotten colony planet of São Paulo, ore prospector Ramon Espejo has no illusions, especially about how the Enye view humanity. Then Ramon murders the wrong man in a drunken fight and takes off into the wastelands to avoid the Enye authorities. Once in the outback, he discovers he's not the only one trying to hide from the Enye—and that the deadly cat-lizards called chupacabras are far from the worst dangers on São Paulo. This tightly written novel, with its memorable protagonist and intriguing extrapolation, delivers on all levels.

A Storm Of Swords (Song Of Ice And Fire)

A Clash Of Kings: Game Of Thrones Season Two (A Song Of Ice And Fire)

A Clash Of Kings (Song Of Ice And Fire)

A Dance With Dragons - Paperback

A Feast For Crows (A Song Of Ice And Fire, Book 4)

A Dance With Dragons

A Feast For Crows

A Game Of Thrones (Reissue): Book 1 Of A Song Of Ice And Fire

A Storm Of Swords: Part 1 Steel And Snow

A Dance With Dragons: Book 5

A Clash Of Kings: A Song Of Ice And Fire

A Dance With Dragons: Part I- Dreams And Dust