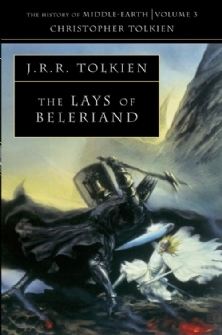 THE LAYS OF BELERIAND

The third volume that contains the early myths and legends which led to the writing of Tolkien’s epic tale of war, The Silmarillion.This, the third volume of The History of Middle-earth, gives us a priviledged insight into the creation of the mythology of Middle-earth, through the alliterative verse tales of two of the most crucial stories in Tolkien’s world – those of Turien and Luthien. The first of the poems is the unpublished Lay of The Children of Hurin, narrating on a grand scale the tragedy of Turin Turambar. The second is the moving Lay of Leithian, the chief source of the tale of Beren and Luthien in The Silmarillion, telling of the Quest of the Silmaril and the encounter with Morgoth in his subterranean fortress. Accompanying the poems are commentaries on the evolution of the history of the Elder Days. Also included is the notable criticism of The Lay of The Leithian by CS Lewis, who read the poem in 1929.

THE LORD OF THE RINGS [I-III]

TALES FROM A PERILOUS REALM: ROVERANDOM AND OTHER CLASSIC FAERY STORIES

THE PEOPLES OF MIDDLE EARTH

THE SHAPING OF MIDDLE EARTH

THE WAR OF THE JEWLES

THE MAPS OF TOLKIEN&#039;S MIDLLE EARTH

THE CHILDREN OF HURIN

THE HOBBIT: THERE AND BACK AGAIN (OFFICIAL MOVIE GUIDE)

THE HOBBIT: THE BATTLE OF THE FIVE ARMIES

STICKER ACTIVITY BOOK (THE HOBBIT: THE DESOLATION OF SMAUG)

THE FALL OF ARTHUR

BEOWULF: A TRANSLATION AND COMMENTARY