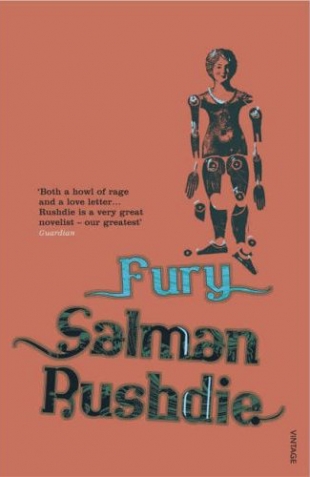 Even before it published, Salman Rushdie's novel Fury was the subject of controversy. Holland's literary community was livid that a novel written by a non-Dutch writer was funded by their government. Rushdie watchers will spend column inches playing "spot the unmistakable biographical references": the main character Malik Solanka is a 55-year-old Indian professor; he later comes to live in England and flees to New York, leaving his wife and young son; in America, he falls for the beautiful Neela, clearly modelled on Rushdie's partner. However, tempting as it may be to focus on the circumstances of a book, rather than the text alone, ultimately it is the prose that must speak for itself.The Fury of the title refers both to the mid-life rage of the protagonist, who finds himself standing over his sleeping wife and son armed with a kitchen knife, and the mythological furies who tore to pieces those men whom the gods had judged. As in his previous novel The Ground Beneath Her Feet, he explores the relationship of the artist to his creation and to his audience. Solanka--Cambridge philosopher, doll-maker and possible serial killer--is the unlikely and unwilling creator of a pop-culture phenomenon that comes to represent everything he despises about modern cultural malaise. He is a part-creator of a culture he hardly understands--an anachronism. The novelist's prose reflects this alienation, but unfortunately with few insights or pleasures for the reader used to his contemporary mythological lyricism. Rushdie's pop references check-list the late 20th-century US from Clinton to OJ to the World Wide Web, and this, combined with their built-in obsolescence, renders Solanka/Rushdie's narrative strained. The urban culture of New York and Webspeak provide rich seams of traditional and new vocabularies and grammar for this most magpie-like of playful language lovers to line his literary nest with. However, in so doing, he cuts himself off from the emotional intensity and drive, combined with layered cultural complexity, that has distinguished his work, the most celebrated being Midnight's Children. Rushdie at his best is an intriguing writer; ultimately, it may be easier to extract him from the media circus that surrounds him than from the comparisons with his own compelling body of work

The Enchantress Of Florence

Luka And The Fire Of Life

Step Across This Line