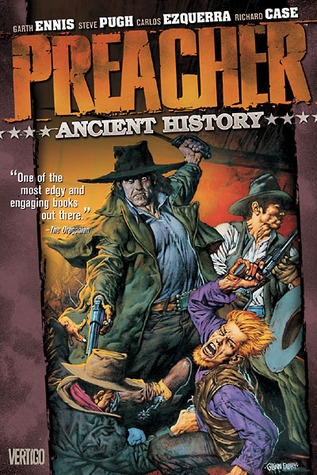 While technically the fourth book in the Preacher series, Ancient History isn't part of the main Preacher story line and doesn't even use any of the main characters (Reverend Jesse Custer, his girlfriend, Tulip, and his vampire buddy Cassidy). Instead, this collection of side stories delves into the freakish, perverse, and downright mythic supporting characters. The main feature is the 106-page demonic Western featuring the "Saint of Killers." In many ways this guy--and the spirit of the ruthless frontier he represents--is the soul of the Preacher series. Writer Garth Ennis said, taking all of the characters of the series into account, "I felt one more character was needed to round out the cast: someone who would directly represent the Old West, who had walked straight out of history, and who brought with him the horror and terror of those times." If this is the soul of the book, then its heart is the "Story of You Know Who," a reference to the character Arseface, whose self-imposed shotgun wound to the face has left him rather disfigured. This boy's abusive family is so overblown, his tragedy so all-encompassing, that a lesser writer would let this swerve into complete silliness. Ennis's talent is to pull pathos out of such outrageousness. He succeeds here again. --Jim Pascoe